Corner Of The Sky  [Drama]


During World War II women weren’t allowed to enlist in the military,

to the front lines.  This is the story of a first brave women who risked

their lives to do what they loved…to fly.

no woman had before…into the war zone.

part of "Wings for Britain", an organization that ferried American built aircraft to Britain, becoming the first woman to fly a bomber, (a Lockheed Hudson) across the Atlantic. In Britain, she volunteered her services to the Royal Air Force.  She won five Harman Trophy as the outstanding woman pilot in the world. Sometimes called the "Speed Queen," at the time of her death, no pilot, man or woman, held more speed, distance or altitude records in aviation history, than Jackie Cochran.

In September 1940, with the war raging throughout Europe, Jackie Cochran wrote to Eleanor Roosevelt to introduce the proposal of starting a women's flying division in the Army Air Forces. She felt that qualified women pilots could do all of the domestic, noncombat aviation jobs necessary in order to release more male pilots for combat. This is the story of the women she recruited for this dangerous mission and how they managed, against all odds, to succeed.

When Lightening Strikes  WINNER OF A SILVER AWARD OF EXCELLENCE AT THE WORLDFEST-CHARLESTON INTERNATIONAL FILM FESTIVAL and recently moved into the final round of this year's America's Best competition.

A novelist gets trapped in her own plot in this time travel/romantic adventure.

Alaina has overcome a tragic childhood and struggled to become a successful novelist and devoted single mother.  Then one storm-tossed, enchanted night, she is plunged back in time to the wild Old West.  Disoriented and disbelieving, she is kidnapped by her own character, a ruthless outlaw known as Killian.

At first Alaina is not afraid.  After all, she wrote this story, invented the notorious Killian and knows he will ultimately be killed by the "hero"...the sheriff who is hot on their trail.  Boldly biding her time until she awakens from this nightmare, Alaina matches Killian word for word...until she is hit with the shock of her life.  This is real!

Once wisecracking and invincible, now she is desperate to return to the child she left behind -- one hundred years in the future.Thrown together by fate, Alaina and Killian discover a love too magnificent to last a single lifetime.  But even magic has a price, and time is running out.  For the sake of Alaina's child, they must risk it all and fight for a future that depends on lightning striking...twice.

Based on the best selling novel When Lightning Strikes by Kristin Hannah, voted by readers as one of the top ten favorite novels of 1994

Send Us An Email 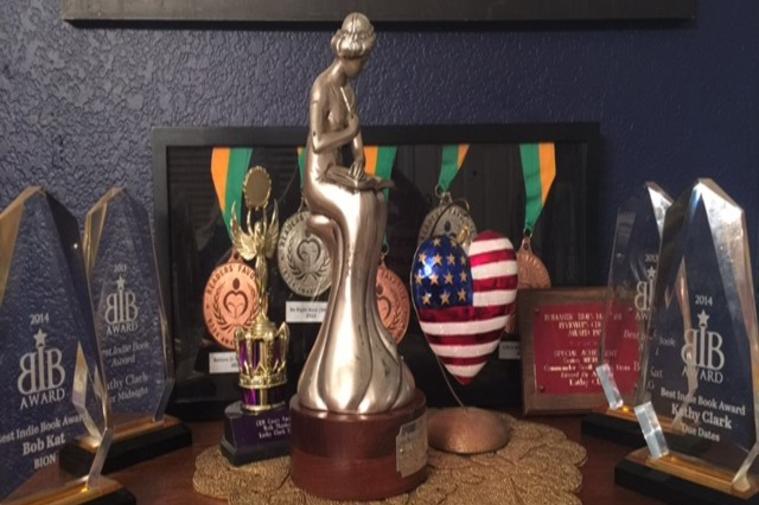 About the Author, Kathy Clark

Kathy Clark has always been a storyteller.  She completed her first novel when she was four years old and self-published it the same year, decades before Amazon birthed the Kindle.  The Little Black Horse That Ran Away was self-illustrated and completely sold out of its first printing.  Thanks Mom!

Years later, Kathy's first adult book was published by Dell.  Since then, she had a total of twenty-three novels published by Dell, Crown, and Harlequin.  With her husband Bob Wernly as a co-writer, they published (both traditionally and epub) an additional fourteen novels.

The freedom to be creative and experiment with ideas and genres has made self-publishing an amazing process.  The author team are currently developing a new contemporary romance series (with a suspense backdrop) titled Breathless. High altitude, high stakes, and high romance, the series will begin in 2017 with the first book, Fools Gold.  The series is set in Cripple Creek, Colorado, a colorful historic town as famous for the huge amount of gold found there as it is for its Old West-style casinos.

Their young adult genre series, Time Shifters, is a time travel romance-mystery series.  The fifth book in the award winning series is planned for a late 2016 release.

With two people developing ideas, plotting, researching, writing and editing, Kathy and Bob are both busy and productive.  To be perfectly honest, Kathy and Bob would rather be riding horses, sitting on a sandy beach, watching movies or plays, and playing a round of golf every few days.  But the voices in their heads insist on coming out, so they keep writing.

For a complete list of books, screenplays, awards and more, check out

When Angela Vendetta's father is killed in a drive-by shooting at Taco Bill's, she inherits more than a mansion in LA and a chauffeur-driven limo.  She also inherits the Family Business.  To the delight of her father's competitors, Angela decides not to follow in her father's rather shady footsteps.  Instead, she starts a legitimate insurance company, but is faced with the daunting task of retraining her employees to save lives rather than wipe them out.

But a Family Business does not die easily, especially when everyone believes it's all an ingenious front for illegal drugs and gambling.  Soon the competitors are fighting over her father's old territory.  Angela tries to ignore it until her own neighborhood falls prey to drug dealers, hookers and suitors more interested in winning her Family Business than in winning her hand.

Angela knows she's no match for these determined men physically.  And she's instated a "no guns" rule for her employees to stop the violence.  So she and her men must use their wits to outmaneuver these old masters, beating them at their own games.

To request a screenplay for consideration or to inquire about hiring Kathy for a project, please send an email to kathy@nightwriter93.com

Kate, an ambitious, slightly stuffy female public defender takes her feisty grandmother, Sarah, on a vacation to Mexico.  A drug dealer plants a five million-dollar statue on them in an attempt to use them as couriers, then becomes desperate when they disappear into the interior.

Kate and Sarah's innocent plans for fun in the sun are soon replaced by an arrest and a jailbreak during which they meet an unlikely hero in the form of Mack, an American expatriate.

When Kate, Mack and Sarah finally figure out why everyone is after them, they try to escape by heading back for the border.  Unfortunately, the "bad guys" do everything they can to stop them, sending them into a spiral of adventure, intrigue and danger.

When they finally do make it back to the States, they barely have time to breathe a sigh of relief before they realize that the "good guys" are not so good.

RUN FOR THE BORDER is a high-speed, action adventure, filled with romance and sprinkled with lively, intelligent humor.

During the late 1800's many men made their

fortunes in silver mining in the western United

States, but no one prospered more than Horace

amassed, at an unparalleled rate and through a

power and his economic influence was so vast

that he brought the United States to the brink

of bankruptcy in order to save his fortune...

a situation that was averted only by a last-minute

act of Congress.  However, his ability to accumulate

wealth and wield power is only background to

the real story.  The most compelling part of his

life was his renowned love affair with a feisty and

affectionately by the local miners as Baby Doe.

than any held before or since, complete with solid

of state and powerful politicians including the

President.  Horace and Baby lived in the most

that, measured by today's standard, would be well

in excess of a million dollars a week.  They built and

owned the social and cultural center of Denver, the

Tabor Opera House, and they received and visited the crowned heads of Europe.

But with all this power, money and influence, Horace and Baby were virtually isolated from society by their colorful pasts.  Their scandalous divorces and flamboyant lifestyle only fueled public resentment.  (Baby's husband had beat, then deserted her, yet she carried the shame of her divorce to her grave.  Horace, wildly in love with Baby, divorced his first wife in a series of desperate political and legal moves that shadowed him until the end.)

What had begun as an opportunistic love affair turned into a deep, lasting passion.  Even with the loss of all their money and power, Horace and Baby's faith in one another never faltered.  His dying words encouraged Baby hold on to their one last possession, their most prolific silver mine, the Matchless.  Baby never questioned Horace's judgment and, while still a young, very beautiful and desirable woman, she moved to a shack near the mine.  Although once incredibly valuable (it produced more than $11 million dollars in silver), the mine was over-worked and never produced again.  But Baby spent the last 35 years of her life mourning Horace's death and trying to prove him right.  She died, in abject poverty, frozen to the floor of the shack, clutching her scrapbooks filled with memories of the one love of her life.

This is the true story about the power, wealth and love of two people and their struggle for acceptance in an unforgiving world.  It is the story of perseverance in the face of rejection and an unyielding faith in one another.  It is a story known to millions around the world, but remains, until now, the greatest love story that's never been told.